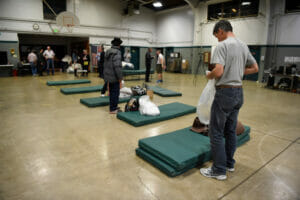 WALNUT CREEK — Donna Colombo was in front of a microphone Thursday night, heaping thanks upon many people at the Winter Nights Shelter’s closing dinner, celebrating a successful 4½-month season. Many of them gave the love right back, saying she ran a good program.

Back in November, Colombo — executive director of Walnut Creek’s Trinity Center working to help the homeless — wasn’t so sure the first season of the shelter operating at the National Guard armory in Walnut Creek would go so well. Neighbors were complaining, police were skeptical, and the City Council’s support was cautious, if unanimous.

But police and city leaders said fears of increased numbers of homeless people in adjacent Civic Park and nearby neighborhoods didn’t materialize, and that trouble at the armory itself was kept to a bare minimum.